1865 – 21-year old Albert Simpson, founder of The Christian and Missionary Alliance, preached his first sermon as a pastor in one of Canada’s most prestigious pulpits; became ordained; got married; honeymooned; and returned to his pulpit inside one week!

1870s– The Holy Spirit revolutionized Simpson’s life. His passion was for the souls of the poor and neglected masses at home and abroad. Sophie Lichenfels, a scrubwoman and member of Simpson’’s New York City church, said, “Pastor, he vent to a nudder fancy church in New York City before he gave it all up to preach to plain folk like me.”

1885 – In Canada, John Salmon, a young Scottish immigrant, left his Toronto pastorate to launch an independent ministry to the “least, last and lost.” When Salmon met his U.S.counterpart in life and ministry, an instant, life-long friendship and association developed.

1887 – Compelled by a sense of urgency to take the gospel message to all nations, Simpson and Salmon were used by God to give birth to The Christian and Missionary Alliance. Dr. William Cassidy, a Toronto medical doctor, was the first ordained missionary in the new mission society. He died of small-pox enroute to China. However, Cassidy’s death was the “spark that ignited the Alliance missionary blaze,” which has burned to this day.

1887 – Compelled by a sense of urgency to take the gospel message to all nations, Simpson and Salmon were used by God to give birth to The Christian and Missionary Alliance. Dr. William Cassidy, a Toronto medical doctor, was the first ordained missionary in the new mission society. He died of small-pox enroute to China. However, Cassidy’s death was the “spark that ignited the Alliance missionary blaze,” which has burned to this day.

1920s – The “mission society” became a major evangelical movement on both sides of the border. In Canada, saddle-bag preachers visiting the homesteads of the West, and evangelists conducting campaigns in the East, harvested many souls.

1930s – Church growth in the ’30’s was in direct contrast to the depression experienced by the entire country.

1941 – The Western Canadian Bible Institute was opened in Regina as a direct result of the need for trained workers in Western Canada. Rev George Blackett, principal and dean, said, “No one is backing it, save the Lord.”

1950s – The Alliance in the ’50’s saw steady, but not dramatic growth. The Alliance stood on the threshold of unprecedented expansion. One very effective means of outreach during those years was radio!

1980 – The first Canadian General Assembly convened in Winnipeg. Dr. Melvin P. Sylvester was elected the first President. There were 228 churches in Canada.

giving was over $3 million.

1987 – U.S. and Canada joined to celebrate the Alliance centennial! Canada’s missionary count surged ahead from 112 to 204 after autonomy.

1988 – The fifth Canadian General Assembly took place in Saskatoon. Plan 2000 was adopted, focusing our attention on the year 2000. The President said, “Goals stretch us. Goals prepare us for the future.”

1990 – The sixth Canadian General Assembly convened in “la belle province” – Quebec. In the hour that the fate of the Meech Lake Accord was decided, the Alliance Church joined hands proclaiming the unity we enjoy in the body of Christ.

1992 – The seventh Canadian General Assembly elected Dr. Arnold L. Cook as our second president. A vision for revival, godly leadership and the refocusing of Alliance missions were the tenents of his leadership.

1994 – The eighth Assembly gathered under the banner “The Church Chosen to Triumph” – celebrating God’s promise that the church is the only earthly organization that will succeed. “I will build my Church…” (Matthew 16:18)

1998 – We saw the formation of Global Ministeries leadership and the appointment of four Canadian Regional Developers.

2000 – Dr. Franklin Pyles was elected third President of the C&MA in Canada at the Calgary General Assembly. Delegates also adopted a strategic plan that introduced the Vision Prayer and launched the Alliance into the 21st Century with renewed vigor and excitement.

2003 – The Canadian Bible Institute and Seminary relocated to Calgary, Alberta.

2004 – On February 24, 2004 Alliance University College (AUC) was launched when the province of Alberta designated AUC as an institution that may grant Bachelor of Arts degrees

We emphasized our commitment to reaching into the difficult areas through the Four S Venture – Silk Road (Europe, the Middle East and Central Asia), Caribbean Sun (Venezuela, Guatemala, Mexico and Caribbean islands), Desert Sand (North Africa and the Sahara region) and Asian Spice (Indonesia to China).

2012 – Dr. David Hearn is elected President and embarks our family of churches on a path 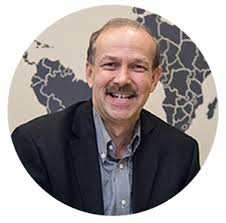 of renewal around being Christ-centred, Spirit-empowered and Mission-focused.

ECD is on the following social platforms:

The term “fourfold gospel” describes the historic emphasis of the C&MA on the person of Jesus Christ. Jesus is our Saviour, our Sanctifier, our Healer and our Coming King. These aspects of the ministry of Jesus are represented in the official C&MA logo. Each element of the logo visualizes one aspect.